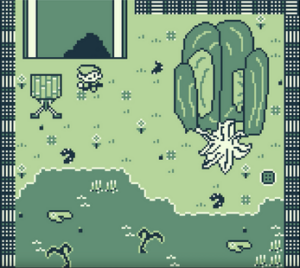 Pastoral (Act 3) by Jason Allen is a folk horror life-simulation game created using GB Studio. This game is the final game of the Pastoral trilogy. The ROM download is not free, but the game can be played for free in the browser.

The game directly follows the events of Pastoral (Act 1) and Pastoral (Act 2), where Dror uncovers his identity and is faced with the task of finding his friends. Much like prior games, Act 3 primarily focuses on its narrative elements to enhance and drive gameplay. This grand finale uncovers the secrets of the world of Pastoral, culminating in a grand climax and plot twist that speaks to all queer identities, especially those on the aromantic and asexual spectrum.​ You can interact with many different objects in the game, such as beds, boxes, barrels, shelves. Use the select button to open up the game menu, where you can check Dror’s pockets, the time, and much more!