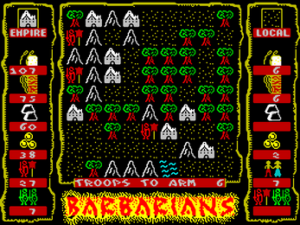 Barbarians by Cyningstan is a historical strategy game of one player made for Sinclair ZX Spectrum.

In this game, you take the lead of a civilised league of twelve cities at the very time the barbarians are entering the land. Your task is to raise armies and send them against the advancing hordes, and you will not rest until every last one is wiped out. While this is going on, you have to manage your empire’s economy. A map is generated at random, and your empire might be inland, on the coast, or a peninsula, or it might instead be on an island. You may rule over flat, featureless plains, or mountainous or heavily wooded areas. The terrain of your country will dictate the availability of resources and the economics of your campaign. You’ll need to trade for resources that your empire lacks.​